The Vegas Wynn is one of the flashiest casino resorts on the Strip that was named after prominent casino developer Steve Wynn. The entire complex is a 215 acre property with a number of luxurious amenities, including a 614 foot hotel tower, a 223,000 square feet convention center and the only golf course on the Strip – The Wynn Golf Club, which was designed by renowned course designer Tom Fazio and is one of the top Vegas golf experiences.

Luxurious all the way, the Wynn Resort has always been about making you feel like a high-roller, from its expensive retail stores and over-the-top Ferrari Dealership to its indoor waterfalls and decorations. However, while it speaks of riches and opportunities on the outside, its table rules can be restrictive, especially to those looking for low wager play.

The Wynn casino is an 111,000 square foot gaming area where you can find the standard assortment of casino games, including over 165 tables for craps, roulette, blackjack, poker and baccarat. The Wynn casino also has one of the most frequented poker rooms in Vegas where most seasoned pros go to enjoy a superior experience.

Blackjack at the Wynn

Like most casinos on the Strip, Wynn used to have a better offering several years ago, but has since declined. The biggest changes came back in 2015 when Steve Wynn announced they would be cutting prices at their games, which resulted in odds cuts across a number of tables, including Blackjack where the house edge was raised significantly on low-limit games.

If you’re looking for low stakes Las Vegas single-deck gaming at the Wynn, you should arrive early as there are only 2 tables offering this type of game. The betting minimum here is $15 and the maximum is $5,000, which is the second lowest limit in the casino, and the rules state that the dealer will hit on soft 17s and you can double down on any cards. However, doubling down after splitting is not allowed at the single deck tables, nor is re-splitting aces.

These tables also have the newly-introduced 6:5 payouts, so think again before the single deck online attracts you. You should also note that there’s no surrender at these games and the house edge is beyond reasonable – around 1.5%.

There are 6 high limit double deck tables at the Wynn that come with 3:2 payouts. The minimum here is $100, while the maximum is capped at $10,000. Surrender isn’t offered at these games, nor can you re-split after aces. However, you can still double down on any two cards and double after you split. The dealer hits at soft 17.

There are also $500 minimum tables outside the main area which offer even better rules. The maximum is also capped at $10,000 at these tables, but unlike the $100 ones, here you can re-split aces. These are also the least occupied tables you’ll find at the Wynn.

The Wynn also has 10 six deck high-limit tables where the dealer stands on all 17s. The rules are also liberal, with doubling down on any two cards and after splitting allowed, as well as the option to re-split aces and surrender. However, while these tables have the best house edge, they also come with a $200 minimum ($10,000 max), which is a lot more than what most players are willing to spend on a single hand.

Six deck shoe games with 6:5 payouts, unsurprisingly, make for most of the Blackjack selection at the Wynn. All tables have low limits ($10 – $5000) and have the dealer hit on Soft 17s. Doubling down is allowed on any two cards and so is doubling after splitting, but you can’t re-split aces or surrender. These are definitely the first tables to be avoided as they have the highest house edge of around 1.99%.

The best six deck games on the main it are the 25$ minimums, of which there are 11 in total on the main floor. The maximum bet here is $5000 and the rules are quite fair, with doubling down after splitting and doubling on any two cards allowed. However, re-splitting aces is not allowed at any of these tables.

True to its opulent appearance and theme, the Wynn is not a place where you go to make money card counting on lower limit tables. As it’s a place for high rollers, you’ll have better chances of your high bets staying under the radar at these tables, although this wouldn’t be an easy task. The high limit games attract the most heat, as that’s where the best rules are, and the Wynn also use trackable chips which adds to their advantage. Furthermore, all 6 Deck games have shallow penetration, which makes it hard to stay on top of the casino.

If you still want to give it a shot, you’re better off at the high limit double deck games, but even here you might want to stay deep undercover. On the other hand, if you’re an advanced card counter and you want to keep your bets low, the 6 deck game with a $25 minimum might be your best shot.

Playing at the Wynn is more about believing in one type of experience rather than actually getting it. While on the outside the casino does feel like place where you can make big money, the rule changes have turned it into something quite different, even if you’re a high roller. Regardless if you have the $500 or the $25 minimum to afford, there are other places on the Strip where you can get better rules and gameplay. In fact, the Wynn is one of the few casinos where there are no double deck games with low limits. 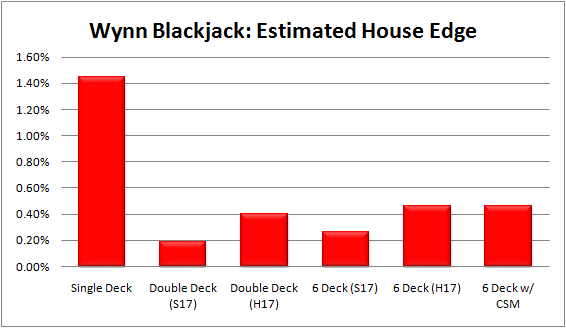 Wynn Casino in Las Vegas is a place where high rollers fill the tables. This helps to hide large bets when counting cards. However, keep in mind that Wynn blackjack games use RFID chips that can track player activity. This can potentially be used to correlate your betting to the count and expose your card counting. The 6-deck blackjack games at Wynn don’t deal very deep, so you’re better off sticking to the double deck. I would recommend either playing anonymously or using very heavy cover if you’re getting rated on a players card.