Review of Blackjack Games at The Venetian Casino in Vegas 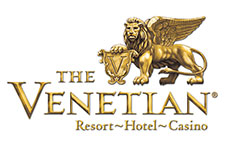 The Venetian is one of the most popular Casino resorts on the Strip, despite its relatively short history (opened in 1991). The resort is a five-diamond luxury resort that is a complex of several venues including its sister casino – the Palazzo Hotel and Casino Resort. The Venetian is the second largest hotel in the world (combined with the Palazzo), spanning over 4,049 rooms and 3,068 suites, and it is only out-shadowed by its Asian counterpart – the Venetian Macau.

As its name suggests, the resort’s design and amenities pay tribute to the Italian city of Venice, with built replicas of Venetian landmarks like the Piazza San Marco and Rialto Bridge found at the location. The complex was built on the grounds of one of the most memorable casinos – the Sands, and it is owned by the same Las Vegas Sands Corporation who is headquartered at the resort.

The Venetian has a 120,000 square feet casino gaming area that hosts 139 tables, including a high-limit salon,  one of the most extensive slot and video poker collections in Vegas (2700 machines), and a Race and Sportsbook area. There’s also the Venetian Poker Room, one of the largest poker rooms on the Strip with 59 tables, as well the proprietary Lavo Casino/ Sports Lounge and electronic Blackjack and Baccarat gaming areas.

The Venetian has three double deck tables with a minimum limit of $50 and a maximum of $5,000. Per the rules, you can double down on any two cards at these tables before and after you split and the dealer will hit on soft 17s.

These are among the few tables that have 3-2 payouts, after the change to house rules was introduced back in 2014. Surrendering is also allowed at the $50 tables and you have the option to re-split aces.

In the high-limit area, there are three double deck Blackjack games that have a $200 minimum limit. The maximum is capped at $10,000, but individual exceptions can also be made. The rules at the these tables state that you can double down before and after you split and the dealer will stand on all 17s. Splitting aces and surrendering is also an option at the tables and the payouts here are likewise 3:2.

There are also three six deck shoe tables at the salon as well but they come with a minimum bet size of $100 and a maximum of $10,000. Just like the two-deck games, you can double down before and after you split and you can also re-split aces. The dealer stands on all 17s and surrender is likewise offered. The six deck tables also have a payout of 3:2.

Most of the shoe games (23 in total) at the Venetian are tables with minimums of $10, $15, or $25 where the payouts used to be 3:2 before 2014, but are now 6:5. The rules at these tables state that you can double down before and after splitting, which is a small consolation prize for the unfair payouts.

The maximum bet on these tables varies from $1,000 – $2,500 and, depending on the tables, some dealers would offer surrender, while others would not. Re-splitting aces is also allowed at lower stake tables.

The Spanish 21 tables have a minimum bet of $10, while the maximum is $1,000. The rules here state that the dealer hits on soft 17s and you can double down after you split, even after splitting aces. Surrendering is available at the Spanish 21 tables (after double down included) and you can also score a number of bonuses. Just keep in mind that the decks have no 10s in them.

The Venetian also offers this popular, yet no so lucrative variation of the game. Standard Switch rules apply, i.e. you can play two hands and switch cards between them and a dealer’s 22 will be considered a push against all non-busted hands. The betting limits are the same as with other low stakes shoe games – $10 – $1,000.

There are three tables at the Venetian that offer Free Bet Blackjack and all are played with 6 to 8 deck shoes. Standard free bet rules apply, i.e. dealer’s 22 is considered a push, and you can split and double down without risking your money. The dealer hits on soft 17 here as well and the games have the same betting limits as other low stakes games ($10 – $1,000).

The Venetian has Stadium Blackjack terminals where you can watch up to four live games and wager on them through a single computer terminal. The games come with a number of side bets and your hands are entirely independent from other player’s actions. The Stadium Blackjack is also the lowest limit variant, with the minimum being only $5.

Card Counting at the Venetian in Las Vegas

Card Counting at the Venetian can be frustrating if you play on the low limit tables in the main pit. Not only does it get confusing to keep track of eight decks that don’t go beyond 50% penetration, but you also have the 6:5 payouts and low stakes which make these games practically unplayable. And besides, you don’t want to risk being spotted for a game that just isn’t worth it.

On the other hand, the high limit shoe games outside of the main pit are much more lucrative. The penetration here is more decent that other tables and the rules are better. In fact, the only thing that’s a con is that not every table will be open at a time, so you can be limited in terms of moving around. However, what’s good about these tables is that even though the Venetian has a top-of-the-line monitoring security system, you won’t draw much heat here which makes them the best choice for card counting. On the other hand, lower stake counters are better off at a different casino where the games are fairer.

The Venetian used to be one of the hottest spots on the Strip before 2014, but ever since their payouts were changed to 6:5, just like in most Strip casinos, it’s no longer as worth it as it once was. Higher limit players ($50 and up) can still find good value and action at the Venetian, but if you’re looking for low limit games, you are better off somewhere else, unless you want to play the Blackjack terminals. 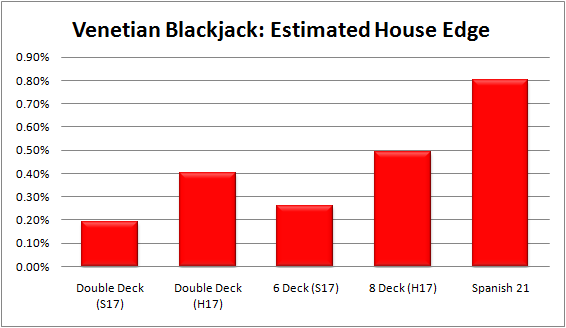 Card Counting at the Venetian in Las Vegas

The Venetian in Las Vegas isn’t exactly the best place for card counting at low stakes. To get good blackjack rules you have to be able to play in the high limit room on $100 minimum tables. Otherwise you’re stuck playing a terrible 8-deck game on the main floor or a double deck game that only deals about 50% deep. For card counting purposes, those games are pretty much unplayable.

The only game I would consider playing is the high limit 6-deck blackjack. There you’ll find great rules and decent enough penetration. Usually there will only be one or two 6-deck tables open, so you can’t really move around much. However, from my experience I’ve never had a problem throwing out some very large bets without getting too much heat. So for higher stakes blackjack players with a large bankroll, counting cards at Venetian is fine. For lower stakes players, you will want to find another casino that has good games on the main gaming floor.