Morongo Casino – Review of the Blackjack Games at Morongo

Morongo Casino is part of a larger casino and spa resort that is operated by the Morongo Cahuilla Indians. It is located near San Gorgonio Pass, in Cabazon. There are a total of 310 suites and rooms and the size of the resort is 44 acre, which makes it one of the largest casinos in California.

The casino was opened before Christmas in 2004 and the total gaming space is 150,000 square feet. In addition to the spa center, it has a range of other notable attractions, such as the Canyon Lanes bowling club, the nightclub Vibe and Mystique Entertainment. It is also home to a number of restaurants, including Serrano, Potrero Canyon Buffet and Natural 9 Noodle Company.

The theme of the casino is the 1960s and at this casino you’ll find over 2,600 slot games with a fairly high RTP. Moreover, there are also 74 gaming tables, including a poker room that features 13 tables. Morongo Casino has a rewards program and players are frequently offered a range of bonuses and promotions.

There are few different versions of Blackjack offered at Morongo Casino.

The 6-deck game at Morongo has a $50 minimum wager limit, whereas the maximum bet is $2,000. The rules are pretty much standard, dealer hits soft 17, you can double down on any two cards and double down after splitting. Furthermore, re-splitting aces is an option, but there’s no surrender. The house edge for this variant is 0.56%.

The 8-deck version is very much the same as the 6-deck in terms of rules. Dealer also hits soft 17, doubling down after splitting is allowed, you can re-split aces and double any two cards. There’s no surrender. The table limits here are somewhat more flexible. The minimum bet can be either $10 or $25, whereas the maximum is $2,000. The house edge is somewhat higher, 0.59%, due to the fact that there are more decks.

The best thing about the multi-deck version with continuous shuffle is the fact that the minimum bet limit is pretty low, either $5 or $10, whereas the maximum is also $2,000. There rest of the rules are just the same, double down and doubling after splitting is available, so is re-splitting aces. The dealer hits soft 17 and there’s no surrender. The house edge here is pretty much the same as the house edge for the 8-deck version, just below 0.60%.

Morongo Casino later introduced a double-deck version, with pretty much the same set of rules as the versions described above, the dealer hits soft 17 and there’s no surrender. When it comes to deck penetration, which is essential for double-deck games, it is not very favorable – around 50%.

Morongo Casino is one of the largest casinos in California and it definitely has what to offer. If you like good entertainment, then it is definitely the right spot for you. In terms of Blackjack, the table limits are flexible enough, although the house edge could be a bit lower. There are plenty of tables, so if you plan on maximizing your profits, you should definitely switch tables and look for the one that offers the best conditions. 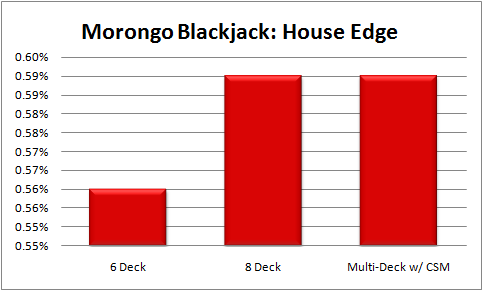 Patience is the key if you’re going to be counting cards at Morongo. All blackjack at Morongo is either 6 deck or 8 deck, so that means you’ll be counting down shoes rather than playing a more action-packed double deck game. That doesn’t mean you can’t make as much money, it just means you’ll have to wait longer for good opportunities. If you’re a serious card counter, table hopping is a must to maximize your edge at Morongo.