Review of the Blackjack Offer at Barona Casino in Lakeside

Barona is a casino resort which is located in the north-eastern part of San Diego County, in the Barona Indian Reservation in Lakeside. The casino is a tribal casino and it is run by the Barona Band of Mission Indians. The casino was established in 2002. It is one of the very few casinos which allows entry to people younger than 21, i.e. people aged over 18, due to the fact that no alcohol is served in the gaming area.

The casino is themed like a ranch and within the resort there is a 400-room hotel. The total gaming space in this casino is 300,000 square feet. Barona also features a golf course, as well as a number of restaurants, including Plaza Grill, El Rancho Grande, Barona Oaks Steakhouse and several other.  If you get a Club Barona Card you can benefit from a lot of discounts and be eligible for a lot of promotional offers.

At Barona you’ll find more than 2,000 gaming machines, including slots and video poker, as well as more than 85 tables where you can play games such as poker, Mississippi Stud, Californian Craps, Pai Gow and, of course, Blackjack.

At Barona you’ll be able to play several Blackjack variants. This casino no longer offers single-deck Blackjack, but it has introduced few new and exciting variations.

The 6-deck Blackjack is the standard variant at Barona. Dealer is supposed to hit on soft 17, whereas the players are allowed to double after splitting and to surrender, but re-splitting aces is not an option. The table limits are really flexible, the minimum bet may be either $5, $10 or $25, whereas the maximum wager is limited to $10,000. The house edge is 0.55%.

Multi-deck with continuous shuffle Blackjack is a version very similar to the 6-deck Blackjack in terms of the blackjack rules. The dealer also hits soft 17, you can double on any two cards, you can double after splitting and you may surrender. Re-splitting aces is not permitted here. The house edge is somewhat smaller 0.53% and the minimum wager can be either $5 or $10. The maximum amount that you can bet at the tables with continuous shuffle is $1,000.

Switch is an interesting variation, where you’re dealt not one but two pairs of hands and then you can switch the cards and move one card from your first hand to your second and vice-versa in order to improve both hands. As this improves the house edge significantly, few other rules have been introduced. Blackjack pays even money and dealer’s hard 22 is considered a push and not a bust.

Zappit is another interesting new variant of Blackjack that was invented only a while ago.  Whenever the player is dealt a hand of hard 15, 16, 17 or 18, they are allowed to zap it, i.e. to get a completely new pair of hands. Dealer’s 22 also results in a push and not a bust. If you get a Blackjack before a ‘zappit’ it will pay the standard 3:2, whereas if you get a Blackjack after you are dealt to new cards, you will only be paid even money.

Free Bet Blackjack is another variation. Here you get to split or double down for free, without an extra wager. When you choose this option, the dealer simply marks your bet, so that if you win, you’ll get double the money with a single wager. Again, a dealer’s 22 is a push and not a bust. But, you are allowed to place a side bet – Push 22, which is won every time when the dealer pushes with a 22. It pays up to 50:1.

It is easy to see why Barona is one of the most popular casinos in Southern California. It offers a variety of games, the house edge is pretty decent and the table limits are flexible. The casino and resort is of pretty decent size and really has what to offer. All in all, Barona is a good choice, both for those who aim to make some money and those who just want to have fun.

* Update: Single deck blackjack is no longer offered as of June 2011. 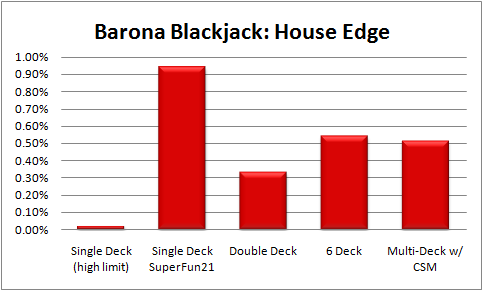 Card counting conditions are pretty good at Barona. If you’re going to be counting cards on the high limit single deck game, you will get a significant advantage over the house with little effort. The Barona pit crew and surveillance knows this is an extremely vulnerable game and they watch closely to protect it. Barona easily ranks as one of my favorite places to play blackjack games on the west coast.