Updated On September 2, 2021
Off
by AP Nick
BlackjackClassroom > Card Counting in Blackjack 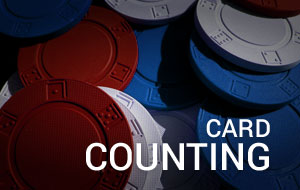 One of the most well-known and controversial aspects of blackjack play over the years has been card counting.

Card counting is severely frowned upon by casinos because it is a skill set that gives the player the edge and helps negate the house edge.

However, it is not illegal; casinos do take it seriously enough to keep an eye out for card counters and even ask them to leave, because it can finally affect the casino’s profits in a hugely adverse manner.

On this page we:

Card counting is not easy to do. It is a skill that requires a lot of practice and also a thorough understanding of how the game of blackjack works. There are quite a few things that a player needs to be able to develop into a good card counter. These include:

The way card counting works, at least in theory, is simple; in practice it takes skill and speed. It has more to do with math – statistics and probability – and less to do with memorizing numbers. As the dealer deals out cards from a shoe during a game of blackjack, players can use this technique to determine the cards left in the deck. This allows the player to analyze his position: does he have an advantage over the dealer and therefore should ride his hand, or is the dealer in a better enough position for the player to play safe?

The following is the percentage of benefits that a player stands to get for using any one of the hands listed above.

Among all these systems, one of the most popular is the Hi-Lo card counting system. We take a look at this system in a little more detail next.

The Hi-Lo card counting system was formulated in 1963 by Harvey Dubner. It has been used and also discussed extensively by blackjack players and writers respectively. The system is simple and that is one of the main reasons for its popularity. This is how the Hi-Lo system works.

With a table of Index Numbers, betting becomes easier. There are many of them around; 2 of these are Illustrious 18 and Fab 4 and were listed by Don Schlesinger in Blackjack Attack. There are different Index Numbers that a player can use. Check Stanford Wong’s Professional Blackjack for a complete list.

We tabulate for you below some of the statistics that can be arrived at using the Hi-Lo card counting system. The assumptions for the data are:

In the above table, the different columns represent the following:

Card counting is a very popular Blackjack technique which allows the player to get an edge over the dealer. Card counting can be a bit tricky though.

What is card counting in Blackjack?

Card counting is an effective way to get an advantage over the casino, by keeping track of the cards that have been dealt. Based on that information, the player is in a position to judge whether the situation is in their favor or in favor of the dealer. Based on that, players can increase the size of their bet when they realize that they have higher chances of winning the game and decrease their bets when the chances are in favor of the dealer.

How does card counting in Blackjack work?

The basic principle behind card counting is simple and it is based on the fact that, generally speaking, cards of high value, particularly aces and cards with a value 10 are in favor of the player, whereas low-valued cards give advantage to the dealer. Bearing that in mind, the player assigns a value to every card and then counts the cards that have already been dealt. At a certain point, after a sufficient number of hands have been dealt, the player is able to reach a conclusion whether the cards that remain in the shoe/deck give them the upper hand. That helps them decide what to play next and how much they should bet.

Is it really possible to get a negative house edge in Blackjack by counting cards?

It depends on the variant of the game in question, but yes, it is possible. If by applying the basic strategy, or its appropriate variation, you can get up to a 0.4% house edge, then by counting cards, the house edge may drop to below zero, in some cases even as low as -2%, which means that the player can expect to actually win more than the casino, in the long run. However, it is not as easy as it seems.

But, isn’t it extremely difficult to count through 6 or 8 decks of cards, while playing Blackjack?

It is, but you don’t count and memorize individual cards. You just assign a value to each card and then just add, or subtract as each card is dealt. The count is called a running count. If you apply the basic count, then cards valued ten and aces have a value of +1, 7, 8 and 9 have a value of 0, and the small cards, 2-6 have a value of +1. Then you simply add and subtract for every drawn card. Then you add the figure of the number of decks that have been dealt and the decks that are left and based on that you’ll know where you stand.

Is there more than one Blackjack card counting system?

Yes, there are multiple Blackjack card counting systems. Some systems are a lot more complicated and the applied value of the cards may differ. For example, there is a system called ‘halves’, where cards can be given values like +0.5, +1.5, or -0.5 and -1.5. More complicated systems can be more efficient, they can improve the player’s winning chances by more than simpler, more basic systems.

So, counting cards is used to determine whether I should increase my Blackjack wager or not?

Yes, you can make permutations to the value of your bet, or even choose to opt in and skip that hand on the basis of the result of your card count, but card counting can also increase your playing efficiency. Card counting can help you make better judgements and even improve your Blackjack strategy. When the result from the card counting is taken into consideration there might be some minor changes in the Blackjack strategy. Moreover, if you count cards, you might realise that there is a situation where taking insurance is actually a smart bet. And that is the only occasion when it is good to take insurance – when it is supported by your card count.

Many casinos ban players who they suspect are counting cards. As a result many players who don’t count cards are banned under the suspicion that they have been counting. As card counting isn’t illegal, many players have contested the practice of casinos to ban card counters. As a result, the Supreme Court of NJ reached a decision that it is illegal for casinos to ban card counters. The problem is that it’s difficult to prove whether someone have been banned because of card counting, as the casinos have a discretionary right to stop anyone from entering.

What other measurements can casinos take against Blackjack card counting?

Some casinos instruct their dealers to engage players who they suspect are counting in conversation, so they would lose track of their count. Other casinos change the wagering rules and don’t allow players who are counting cards to increase their wagers. Often when a player is caught counting cards, they are not thrown out immediately, but they are blacklisted and no longer allowed to enter the casino. All casinos use scanners that detect card counting software and the use of such software is strictly forbidden.

Is it possible to count cards if you’re playing Blackjack online?

Technically, you can count the cards, but if you’re playing a software-based RNG Blackjack, it’ll be of no use, because the game isn’t played with actual decks, whereas if you’re playing live Blackjack, you could try to count the cards, just like you would in a land-based casino. But, live Blackjack providers make sure that the cards are shuffled often enough, so that you won’t even reach a point where you’d have an actual advantage over the dealer.